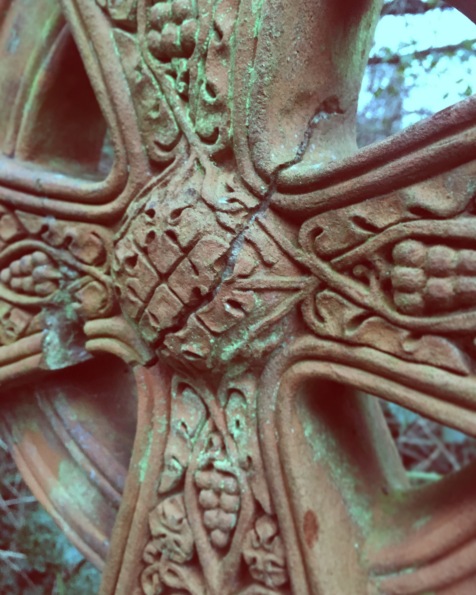 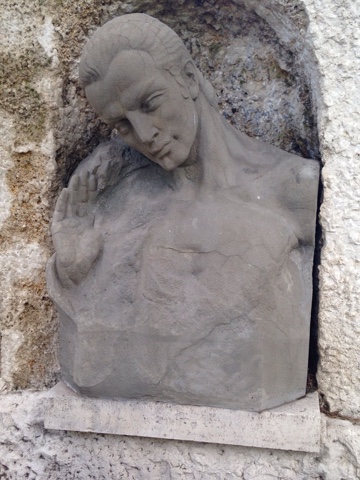 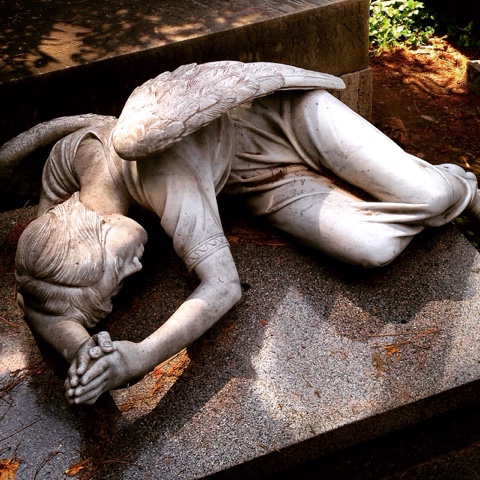 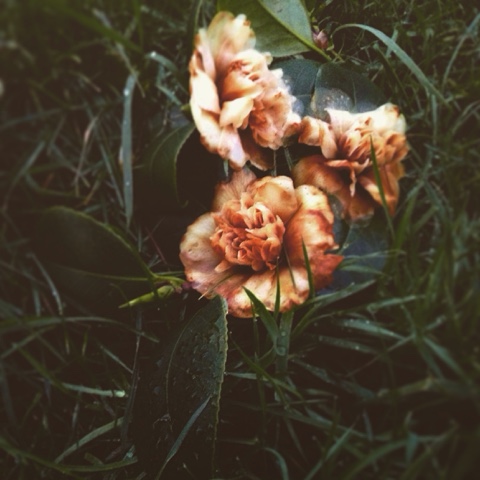 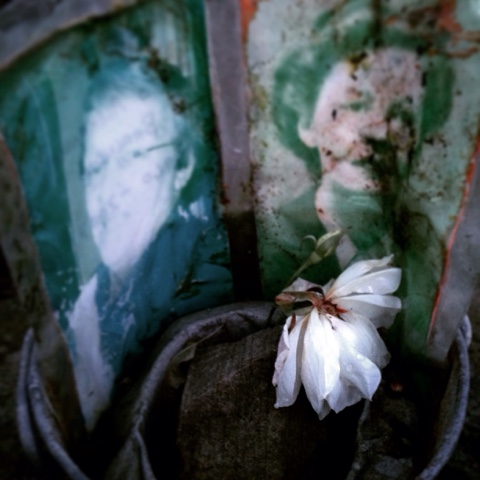 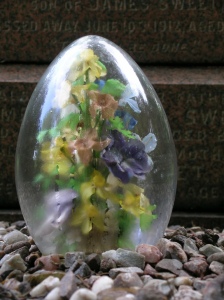 image credit: Molly Russell I don’t normally post many words on here, but through the strange planet-aligning powers of social media, I’ve been in contact with someone I worked with many years ago – Molly Russell. What a pleasure it is to reconnect after all this time, and to find she is working as an artist, moreover an artist exploring my favourite themes – death and art. We didn’t once speak about art at the time! Just telly admin stuff and what we were having for lunch. So, dear readers, please go here and most definitely here to see Molly’s investigations and expressions of death and art. I know you will approve (more information after the jump).

image credit: Molly Russell “Molly Russell graduated from Glasgow School of Art. In her show, ‘Dearly Departed’ she explored the themes of mortality, phobia and relationships through sculpture, photography and video. During this project she collaborated with the coffin makers, JC Atkinson and the florist, AG Price Flowers. “I’ve always been fascinated by the death rituals and traditions of different cultures and religions. When I travel I actively seek out cemeteries and research local customs, giving me a real insight into their beliefs and creative expression. I am searching for the perfect funeral. In Mexico I found colour, kitsch, laughter, humour, singing, raw emotion and a spirit of togetherness, which I found to be both positive and uplifting. In India I was inspired by a mixture of openness, spirituality and a healthy acceptance of death as a normal part of everyday life. I hope we can learn from these and other cultures; informing and ultimately liberating our own relationship with death and dying.”” 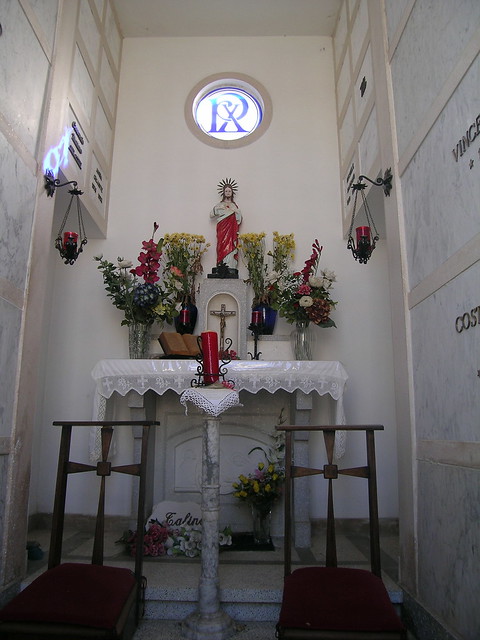 Favourite Graves is back. Links before this post may still be broken, but I am working hard to fix them. Anything after this point will be working just fine.

Here’s a jolly one from Kensal Green, London, UK, to get you in the mood.

Please bear with me, the Flickr stream has been closed for a while now as I am putting an artbook together.

This site will be back up and running very soon.

In the meantime, thank you for your patience. 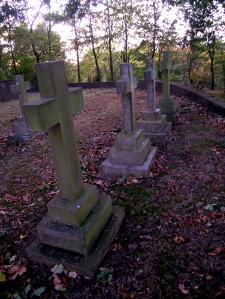 Hello! Not posted in a while, have many other projects going on. This is an interesting picture as it’s taken at the burial ground in the now abandoned (apart from when in use for filming) St. Joseph’s Missionary College, London. You can read more about the place here.

I love receiving photos from people to add to this site… 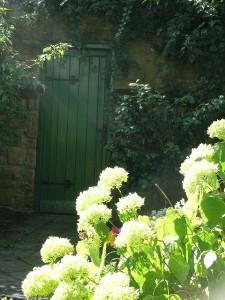 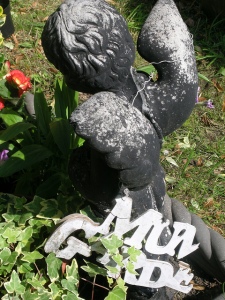 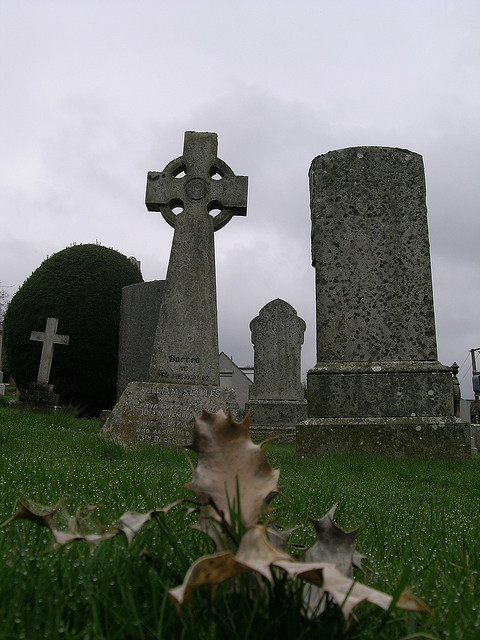 Thanks to Pirate for these images, which you can find more of here. 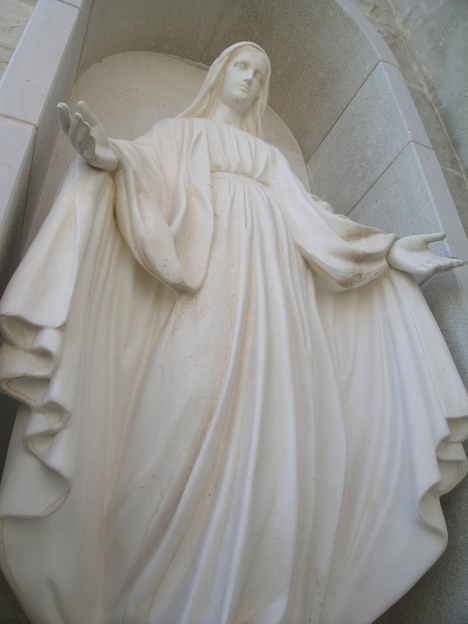 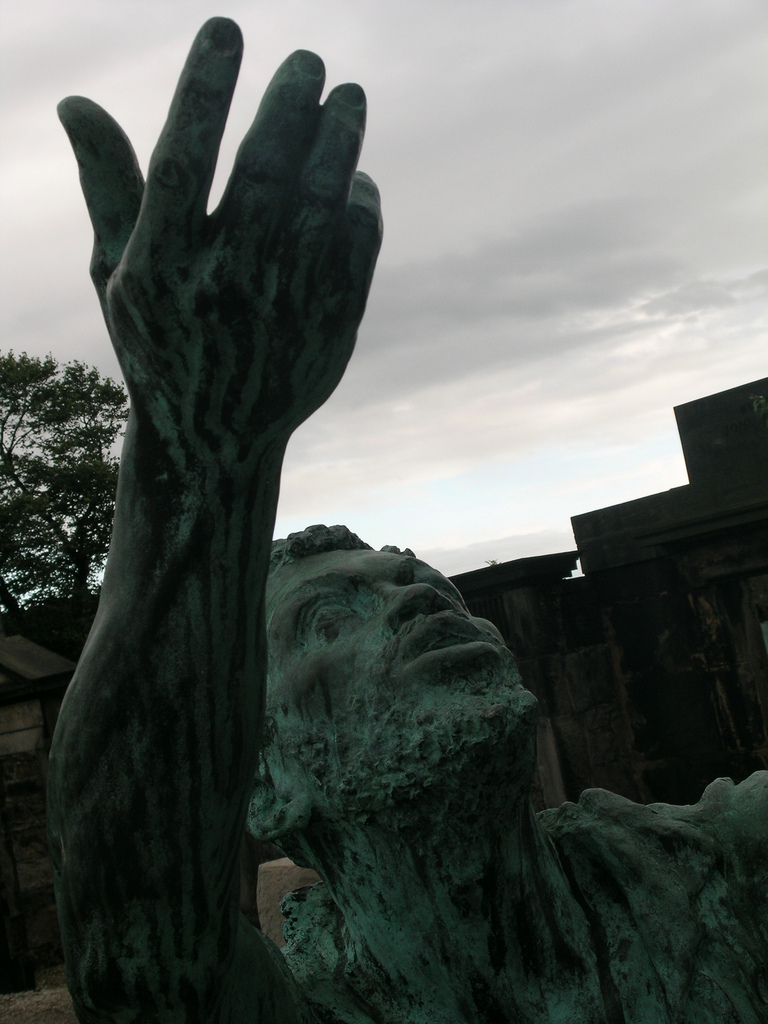 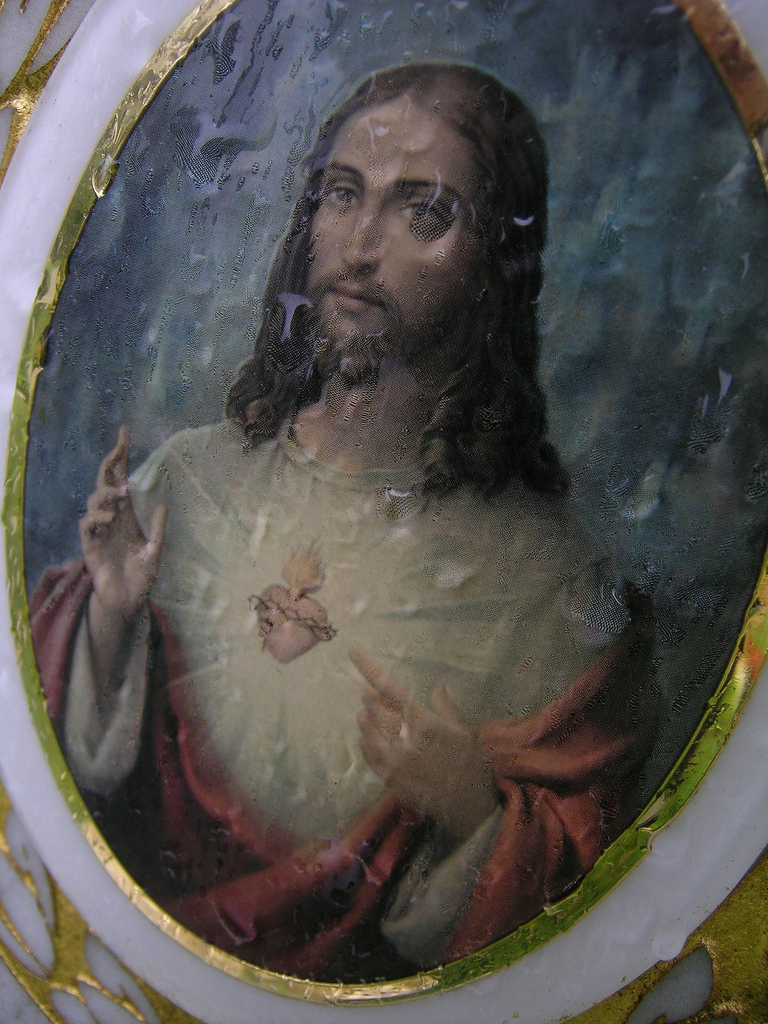 Sorry, have been away for a while. I have lots of new photos for the blog. And this to placate you…

Sorry, have been away for a while. I have lots of new photos for the blog. And this to placate you…

What better way to spend a rain sloshed Sunday than slithering about Hendon Crematorium with my macro lens? I haven’t got a good collection of graveside detail so far, I mean a real ‘close-up’. So today I concentrated on taking tight shots and spent time looking for details that really stood out – ornaments, flowers (both real and not), cracks, chips, growths and grooves. Here follows an establishing shot of the lovely gothic Old English signage, plus a few of my favourites from today…

This is the last photo I took and my lens was pretty smudged up by that point.

I received this email and the attached pictures recently, for which I am very grateful. All caps, shouty, I like it. Thank you Krista Jurisich!

“THIS IS MY FAVORITE CEMETERY TO VISIT

THE PRACTICE HERE IS THAT YOU MAY BURY YOUR LOVED ONES AT NO CHARGE, ANYWHERE YOU CAN FIND A SPOT, AND FOR AS LONG AS YOU MAINTAIN YOUR PLOT. THIS IS A VERY OLD AFRICIAN AMERICAN CEMETERY AND IT IS ALWAYS A WORK IN PROGRESS / WHICH IS WHY I LOVE IT SO! MANY JAZZ GREAT HAVE BEEN BURIED HERE AND THE SPOTS HAVE BEEN LONG LOST. IT HAS A WELCOMING AND LOVING VIBE.”

Last month I was in Edinburgh and I went on a night time tour of Greyfriars Kirkyard. I’ve been to the kirkyard before, and spent a lot of time researching the brilliant and sometimes chilling stories that extend from this beautiful resting place.

Promotional poster for the tour

I’d been meaning to go on the City of the Dead graveyard tour for a long time. After a couple of failed attempts (turning up for the midnight tour when there was no midnight tour) I joined a group for a visit on my second to last evening in Edinburgh.

The first half hour of the tour is spent walking to Greyfriar’s Kirkyard, the guide stops us at various points and explains a bit of pop history, murder, torture, architecture etc.

View of Edinburgh Castle from one of the tour stops

Depending on how well read you are on Edinburgh’s ‘bluidy’ history you could probably skip this part of the tour. Unfortunately there’s no option to do this. In fairness the whole tour is fun, I don’t mean to sound like a spoilsport…

…Which there were quite a few of. One girl in particular was insisting on being the sensible skewer of paranormal believers, constantly contradicting all the guide told us, incessantly sticking her oar in. Now I am a firm skeptic and the sole reason for me going on the tour was to have a bit of a laugh in the dark and more importantly, get into the Covenenters Prison.

We didn’t spend long in that section of the graveyard, just 15 mins, 10 of which was spent in the ‘Black Mausoleum’. Ironically the voice of reason paranormal busting girl got the fright of her life in the mausoleum. I won’t go into details, you’ll have to take a trip to Edinburgh and find out why yourself. Although we didn’t spend long in the Covenenters prison I was able to secure an in and next year I may be able to get a private view of that section of the kirkyard, the reason being I will document what I find on this blog.

Here are the few photos I took on the tour

Excellent blog ‘Everythingnice.‘ have linked back to me with a few kind words.

Please go and check their blog out, it features everything from streamlined wooden medicine cabinets to Walter Potter taxidermy. It’s a classy blog and I’m sure your’ll love it.

Deborah Harvey has some interesting photographs on her Myspace profile. With her kind permission I am able to add some of the photos below. Please make sure you visit her albums, and not just the graves either – she has some great images of Great Britain.

History of St. Melangell’s church, taken from their website.

“Melangell was a female saint of the 7th century. According to tradition she came here from Ireland and lived as a hermit in the valley. One day Brochwel, Prince of Powys, was hunting and pursued a hare which took refuge under Melangell’s cloak. The Prince’s hounds fled, and he was moved by her courage and sanctity. He gave her the valley as a place of sanctuary, and Melangell became Abbess of a small religious community. After her death her memory continued to be honoured, and Pennant Melangell has been a place of pilgrimage for many centuries. Melangell remains the patron saint of hares.

There has been a Christian Church here for over 1200 years. Its setting, in a place of great beauty deep in the Berwyn Mountains, is peaceful and unspoilt. The church stands in a round churchyard, once a Bronze Age site, ringed by ancient yew trees estimated to be two thousand years old. Parts of the building date from the 12th Century though the most recent, a rebuilding of the apse on its original foundations, was completed only in 1990. The impression is still that of a simple Norman church, well loved and beautified over the years.

The church contains a fine 15th Century oak screen with carvings that tell the story of Melangell and Prince Brochwel. There are also two medieval effigies, one of which is thought to represent the saint; a Norman font, a Georgian pulpit, chandelier and commandment board, a series of stone carvings of the hare by the sculptor Meical Watts, and the mysterious Giant’s Rib.”

“The church’s greatest treasure is the 12th Century shrine of Saint Melangell. This was dismantled after the Reformation and its stones, carved with a strange blend of Romanesque and Celtic motifs, were built into the walls of the church and lych-gate. They were reassembled in the last century and have now been re-erected in the chancel. The result is an impressive monument, unique in Britain and recently described by a leading scholar as ‘of pan-European significance’. Bones said to be those of the saint have been deposited within the shrine. The church is listed Grade 1: an illustrated history and guide is available.”

Lora recorded many interesting images (below), but my favourite of all has to be the intact immortelle shrine found in the church yard. I have seen many modern (post 1970) immortelles on my travels but never a Victorian one. I suspect this one isn’t from the date of death on the stone but it well could be (judging by the rusted metal guard, although weather damage to metal can take effect very quickly). Anyway, the bell dome glass looks nice and thick so I hope it remains intact for many years to come!

Finally, here is some more information on the Saints of North Wales, in particular the abbess and patron saint of rabbits, hares and small animals, St. Melangell. More images by Lora can be seen on the Favourite Graves Flickr photostream.

Thanks to Morbid Anatomy for this wonderful blog post.

Listen to ‘Ypres, The City of the Dead’ while you look through the many war graves at the various cemeteries of Ypres.

Thanks to Simon Farr for his extensive Ypres archive.

“Locre Churchyard. The graves are in two plots either side of the church, graveyard contains the bodies of three shot at dawn soldiers.”

Some beautiful graveside photography featuring unique gravestone folk art. Be sure to look through the ‘skulls’ set.